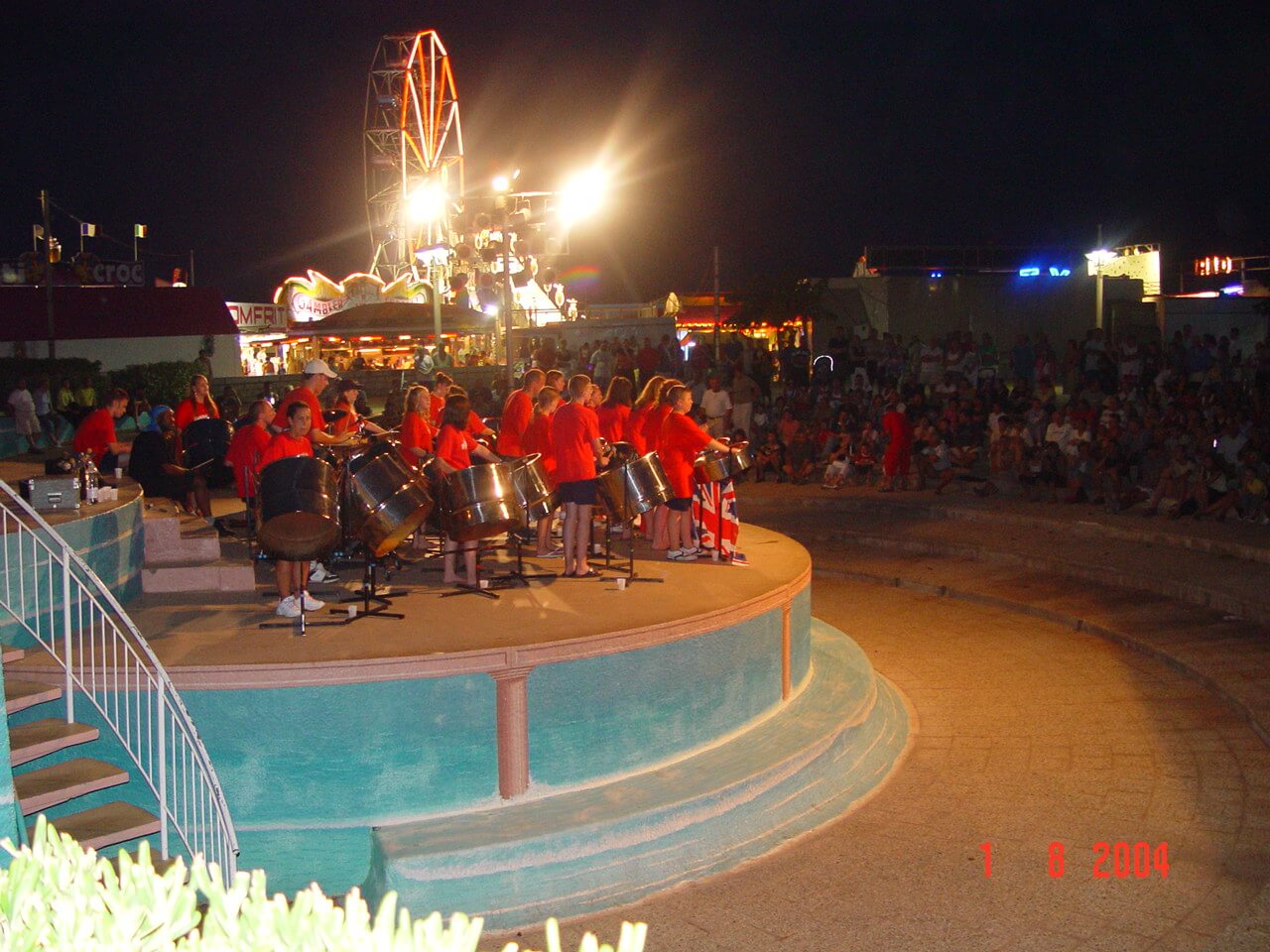 A wet Sunday morning in Stockport saw 28 intrepid players and parents set off for the Mediterranean sun. We didn’t have to wait long with sunbathing starting as soon as we reached Portsmouth for our five and a half hour smooth crossing to Le Havre on board the Pride of Portsmouth. An overnight break in the Formule 1 at Evreux and we were ready(?) for the eleven hour journey south to Valras Plage.

It doesn’t take long to settle down when you are eating your evening meal watching the sun go down over the sea, and a ‘chill’ day on Tuesday started the suntan building. Once settled into the Hotel Alcyon, and its adjoining bistro the Little Delph, the group refreshed at Aqualand. A few arrangements with Madame Monnette at the Palais de la Mer, and Pantonic All Stars were finally playing on the Mediterranean sea front at Valras Plage ( link to photo Front de la mer 002) to an audience that was just coming off the beach, or later on, enjoying a stroll in the evening sun.

Thursday brought an afternoon sail on the pleasure boat ‘Lily’, arranged by the local council, it gave everyone a different off-shore perspective on our sunny holiday resort. With the addition of Scott and Nicola flying into Toulouse, and several conversations with the local police, a second performance followed on that evening in a car park off the Rue Charles Thomas. ( link to photo Rue Charles Thomas 001)  Once more an enthusiastic audience gathered till the end and purchased the recorded music available.

Friday saw the group in Stockport’s twin town Beziers where Annie Dullot and Cristel had arranged a tour of the old quarter and the Cathedral, followed by a civic reception in the Hotel de la Ville with a welcome speech by Madame Valles, the deputy Mayor. Armed with Beziers T-shirts, and a sample of Feria wine, the group made its way to play on the Allees Paul Ricard ( link to photo Allees Paul Ricard 003)  for the afternoon and early evening, returning tired to Valras Plage for a relaxing meal and drink. Saturday was declared another ‘chill’ day to allow some more sunbathing and swimming off the sandy Valras Plage. The evening brought an open air jazz concert with Michael Jones to settle down the day.

The heat of Sunday saw a Pantonic encampment ( link to photo Theatre de la mer 002)  built to protect the players with four gazebos and a large market stall sheet. A small crowd gathered in the lunchtime heat but beach activities prevailed. Not so on the same evening when, settled on the stage of the open air Theatre de la Mer, a crowd of around a thousand gathered to listen to the music. With the stage thankfully lit by technicians from the Palais de la Mer, the climax of the evening came at eleven o’clock ( link to photo Theatre de la mer 005)when Pantonic All Stars received a standing ovation from the huge crowd that had stayed for the whole performance.

Carcassonne was the destination for Monday. This beautiful mediaeval walled city and castle provided plenty of shopping opportunity and fun for all, particularly in the House of Horrors and the House of Torture. The following day a mutual win-win day was arranged with Jean-Piere and Eric Ambrosini, enabling the group to visit Les Sablons, a camping and caravan park at Portiragnes Plage. It’s not often that the orchestra can get the opportunity to swim between performances ( link to photo Les Sablons 003)but three sessions of each, together with the hospitality provided, made for a really enjoyable day out.

After an early morning storm and damp start, Wednesday eventually brought another day of sunbathing, gift shopping and wine tasting at the local travelling wine market followed by a fun evening at Europark theme park. Back to business on Thursday took everyone to an official reception at the Palais de la Mer in Valras Plage, with a spread of shellfish, quiche and pizza’s washed down with local vino. The success of Sunday evening had spread and we were advised to give our seventh and final appearance at the Allees de Gaulle, ( link to photo Allees de Gaulle 002)outside the Mairie and amongst the lunchtime diners. Another successful performance, capped by the second ‘break-up’ involving putting everything away whilst the music continues, brought our musical tour of the south of France to a close.

Another group meal ( link to photo Belle Vue 002)at Le Bellevue completed our last day before heading home, with presents and thank you to all those who had helped make the holiday a success ( link to photo Hotel Alcyon 007)including Regis and Marie-Laure Godon from the Hotel Alcyon, John and Paul, our drivers from Smiths of Marple, all the parents and of course all the players and Scott, without whom it wouldn’t have been a musical happening.

After throwing a multitude of bags filled with empty water bottles and rubbish into the street bins, the journey home started with an overnight stop at Orleans where the Golden Arches attracted most of the players and the others enjoyed the café culture of this beautiful city. A final shop at a hypermarket in Chartres, then aboard the Pride of Portsmouth again for another good channel crossing. Stockport at two o’clock in the morning is not as attractive as the South of France in the sun, but its always good to get home again.

Along the way we attracted a number of offers for future performances, including Naples in September, South of France for July & August 2005. Not perhaps realistic for our size of group, but the offer of a music festival to the east of Paris for a couple of days next summer sounds really attractive.

There are many people who helped to make the holiday enjoyable and we feel we can chalk it up as a success based on the comment from our drivers. “Thank you for letting us share your holiday. It was a privilege”.